Violinist Fiona Pears and guitarist Connor Hartley-Hall share a love of Gypsy jazz. This music was originally made famous by legendary guitarist Django Reinhardt and French virtuoso violinist Stéphane Grappelli, when they formed the ‘Quintette du Hot Club de France’ back in the 1930s.

The music Fiona and Connor will be performing in their upcoming shows will be a mix of fiery Gypsy jazz, heartwarming ballads and some well known classics such as

For this special show double bass player Pete Fleming will be performing also. These shows will be exciting and dynamic; a musical experience not to be missed.

THIS CONCERT HAS NOW SOLD OUT! 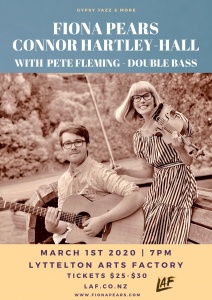